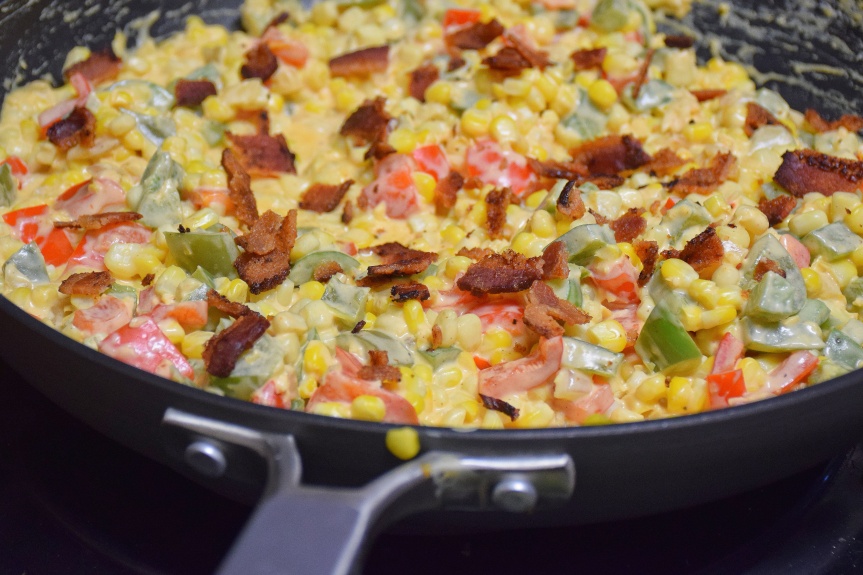 This post is alternatively titled: How to Make Your Vegetables Less Healthy. Just wanted to acknowledge that up front. Nothing makes vegetables yummier than bacon and cheese! Maybe you have picky little kids who you’re trying to convince to eat something other than mac & cheese and frozen chicken nuggets (describing my brother Jeffrey from age 5 to age 21…)? Or maybe you’re just trying to find a veggie side dish that’s a little bit more decadent? That’s what I was doing when making this dish. All I was craving for dinner was chips and dip – since apparently that is not a true meal (says who am I right??), an indulgent side dish was in order.

I’ve had this recipe pinned for a long time – I feel like I type that sentence a lot around here. This one has been pinned 114,000 times! It’s so impressive to me when blogs take off like that – so cool! We have quite a ways to go before we would reach that level – but hey man, one of our recipes, Bay Scallop Risotto, has been pinned 33 times! Given that I’m still shocked to see that people who are not related to me have ever read this, that’s pretty spectacular! I guess that’s the internet for you…

In mental preparation for a dinner of Baked Jerk Chicken Wings, I knew I needed a cooling contrast to those fiery-hot wings. I mentally tossed around a few ideas while perusing Pinterest. When I came across this blog and recipe while Pinteresting, I knew I found the perfect accompaniment! It was, and since we’ve been using the crema for all sorts of different dishes. It is incredibly versatile. Not only have we topped the chicken wings with it, but also a nice spice-rubbed steak. It works well as a sauce spread inside of a wrap with just about any protein and vegetable (our easy, go-to weeknight dinner). Try it as a dip for crudites, spread on a cracker, or as an alternative to your boring ketchup next time you have potatoes wedges. The possibilities are endless 😉

(Adapted from this recipe at Turning Clock Back)

*Many standard grocery store chains carry crema or Mexican table cream these days – usually in the cheese section or by the sour cream. If not, it can be found in a Mexican grocery, or substituted with sour cream.