In September 2019, we started participating in The Kitchn’s Cookbook Club. Imagine a book club, but with cookbooks. It’s been really fun and inspiring. The cookbook club is based on social media, and it’s fun to see everyone else’s creations and learn from their trials & errors. All our blog posts from cookbook club selections are tagged with Cookbook Club, but here we’ll recap each month’s endeavor and the book itself. If you’re interested in participating, anyone can join! Join in the fun by either requesting to join the FB group “Kitchn’s Cookbook Club,” or use/follow the hashtag #kitchncookbookclub on Instagram. (Most of the discussion happens on FB though). So without further ado…

Favorite Recipe – Toss up between the pasta and the sausage & veggies in agrodolce – we LOVED both!

Book Review – At first I wasn’t super excited about this book. It’s not entirely a cookbook in the traditional sense; instead it is more of an educational tome of cooking and food science, with some recipes. This turned me off a little bit at first, but the more time I spent with the book, the more I appreciated it. I learned a lot and was very pleased with the recipes we tried. The illustrations are also super fun! It also prompted us to watch her four part Netflix mini-series (also called Salt Fat Acid Heat), which was great too! Overall, my appreciation of the book grew over the month for sure!

The Book – Indian (-ish): Recipes and Antics from a Modern American Family, by Priya Krishna

Favorite Recipe – Divided household on this one. Selim liked the chicken as a quick weeknight dinner option and Ally loved the smashed potatoes. They’re like Indian-flavored potato nachos!

Book Review – Think of this book as a peek into Priya’s mother’s Indian-American kitchen when she was growing up. Most of the recipe are based in Indian cuisine and flavored with Indian spices, but have tweaks and adjustments for life in the US. To be honest, Selim (who grew up eating a lot of authentic Indian food) was a little disappointed in that – he was hoping for more traditional Indian dishes. We didn’t end up making a whole lot out of here for that reason… just weren’t all that inspired.

Favorite Recipe – By default since we only tried one… The salted maple pie was absolutely delicious though, so it’s definitely worthy of favorite status!

Book Review – This book is gorgeous and full of detailed pie-making instructions – definitely needed for reluctant bakers like us. The detail of step by step instruction for the dough especially is really helpful. Our dough turned out flaky and delicious, but it was not the favorite dough of a lot of other (more proficient bakers) in the group. We wanted to make quite a few other recipes out of here, especially the savory handpies, but that brings us to the main downside of this book… The recipes are quite time-consuming. Many of the pies are full-day, if not full-weekend efforts. We just couldn’t make the time to try any others. 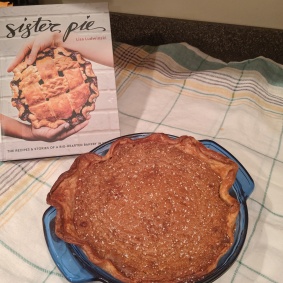 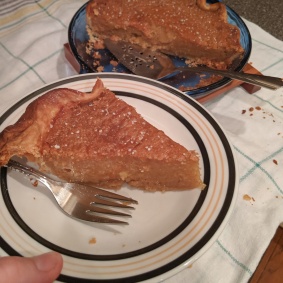 The Book – The Joy of Cooking, by Irma Rombauer

Favorite Recipe – Another default favorite since we only made one recipe… Holiday business got the best of us!

Book Review – Joy of Cooking is kind of in its own category of cookbooks. It’s a classic! It’s also very different from so many other cookbooks these days… it doesn’t have any pictures, the font is tiny, and the ingredients are listed chronologically within the text of the recipe. It has SO many recipes; there was no way we were reading the whole thing. I think it’s best used as a book when you have an ingredient and need inspiration of something to do with it! There isn’t anything fancy or super-exciting in there, but there are a ton of solid, classic recipes.